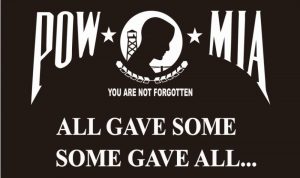 Please join Big River VFW Post 5331 this Friday at 6:00pm for our annual POW/MIA Recognition Day Ceremony at the VFW Post flagpole. In addition to recognizing and remembering our former prisoners of war and those missing in action, we will also recognize our Blue Star, Silver Star and Gold Star family members. All are encouraged to attend.

POW/MIA Recognition Day is commemorated on the third Friday of every September, a date that’s not associated with any particular war.

In order to comprehend the importance of this day, all you need to do is look at the sheer number of Americans who have been listed as POW/MIAs.

According to a 2005 Congressional Research Service report on POWs:

According to the Defense POW/MIA Accounting Agency, 82,478 Americans who fought in those wars are still missing, including:

The DPAA said about 75 percent of those missing Americans are somewhere in the Asia-Pacific. More than 41,000 have been presumed lost at sea.

Efforts to find those men, identify them and bring them home are constant.  For example, the DPAA said that in 2016, it accounted for 61 men missing during the Korean War. They had been identified either through recovery operations, from remains turned over by North Korea in the 1990s, or they’d previously been buried as unknowns.

The traditional POW/MIA flag that’s well-known across America was actually created many years before the remembrance day became official.

In 1971, a woman named Mary Hoff contacted a flag company near her home to see if a flag reminding people of POWs and the missing could be made. She was one of the many waiting to see if her husband, Navy Lt. Cmdr. Michael Hoff, would ever return home after his plane had been shot down over Laos.

World War II pilot Newt Heisley designed the now-famous flag, which was made in black and white to represent the sorrow, anxiety and hope symbolized by the image of the gaunt man featured on it.

For every POW/MIA Recognition Day since 1982, the flag has flown just below the stars and stripes at the White House – the only other flag to ever do so. In 1998, Congress ordered it to also be displayed on Armed Forces Day, Memorial Day, Flag Day, Independence Day and Veterans Day.

Meetings
Post & Auxiliary meetings are held at 7:00pm on the second Monday of each month.